This is an excellent book, well narrated. Rasenberger’s history starts with the roots of tension between Castro’s Cuba and the United States and covers Castro’s extraordinary trips to the U.S. in 1959 and 1960, the lead-up to the Bay of Pigs invasion, the desperate battle itself, and its lengthy aftermath. Bob Walter’s deep, clear, perfectly measured voice draws listeners into the now-almost-forgotten world of the Cold War and John F. Kennedy’s New Frontier. The story line is compelling and easy to follow. The characters are colorful and articulate. Rasenberger is extraordinarily fair-minded in his treatment of this emotionally charged disaster. The writer’s style and the narrator’s voice complement each other exceptionally well. F.C. © AudioFile 2011, Portland, Maine

Your Brain at Work

With a rich baritone voice, Bob Walter adds appealing gravitas to this state-of-the-art guide to kinder, gentler productivity at work. The well-organized book pulls together concepts from psychoanalytic theory, Buddhism, managerial psychology, neuroscience, and ADD coaching practice. Walter’s natural diction and phrasing make every concept sound pleasingly familiar and understandable. Clear writing by a nonscientist also helps, along with the clever metaphor of representing intentional thought as occurring on a stage where actors (thoughts) come and go. A broad range of functional challenges unfolds in the running narrative of two executives who struggle with overload and distraction before they implement the author’s intuitive strategies. T.W. © AudioFile 2011, Portland, Maine

The Liar in Your Life 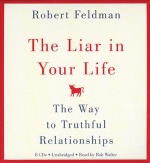 A psychology professor with a knack for storytelling shows how pervasive lying is and what to do about it. An authority on deception, he draws on the latest research and expert opinion and applies enough of his intellectual pizzazz to make this massive body of knowledge come across as enjoyable and accessible. Bob Walter adds his own pizzazz in his narration. With an approach that is arresting but not alarming you can feel the drama as he delivers examples of lies that occur in personal, government, media, and business arenas. His vocal centeredness helps him engage with the book's exposé approach and make listeners pay attention without making them feel manipulated.  T.W. Winner of Audiofile Earphones Award © AudioFile 2009, Portland Maine [Published: November 2009]

The "Dead Hand" alludes to a doomsday scheme in which a machine pulls the switch to launch a nuclear retaliation after all the human beings have been vaporized. Amid the governmental paranoia and posturing following WWII, the U.S. and the U.S.S.R. armed themselves for a battle never to happen. The Cold War became a competition of colossal excess. Narrator Bob Walter demonstrates his unique and laudable skills as he delivers this account like a thriller. He rolls out the abundant Russian in plausible comfort, uses the subtlest inflections when delivering quotes, and makes the spy stories riveting. Walter's restrained but dramatic portrayal of the Kremlin's mistaken shooting down of a Korean Airliner in 1983 creates a scenario as gripping as any Tom Clancy novel. J.A.H. © AudioFile 2009, Portland, Maine

Bob Walter supplies an authoritative voice to Sutton’s follow-up to THE NO ASSHOLE RULE (2007). Walter makes Sutton’s no-nonsense views and straight-from-the-hip wording flow naturally. His delivery of the stories and studies that support Sutton’s discussion of bosses good and bad is flawless. The variety of accents Walter affects for the quoted passages provides a welcome change from the more prosaic pitch and pacing of the exposition. Walter follows through on Sutton’s quick-paced, conversational style and clearly delivers the audio-friendly summaries that highlight key points at the end of each section. E.N. © AudioFile 2010, Portland, Maine