The One Stop Shop -- script in, product out

• Reading
A founding member of the Company Theater, Bob Walter as a reader brings a unique perspective into the booth. Having directed many of the finest readers in the business, he has honed his craft based on observation of their talents and techniques.

• Directing
With his long track-record as a producer/director for publishers such as Random House, Hachette, Penguin and Simon and Schuster, he is ideally suited to maintain the same high standards obtained when a producer/director goes into a recording studio with an engineer and a reader to produce material that an editing team then assembles.

• Recording
As a former studio owner/producer of Sound Arts recording studio, he achieves a sound quality that stands up to comparison with the top studios.

• Editing
As an editor, he adds his director's sense of pace and timing to provide an extra layer of polish and ease of listening to the final result.

• Music & Sound Mixing
As a music editor and sound designer with years of experience working in the film community, he brings serious skills to bear when music and sound design are required. 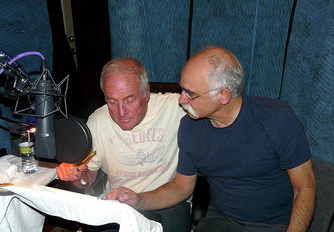 Jerry Weintraub & Bob Walter in the studio
After hundreds of projects as an Audie-winning producer/director, Bob Walter continues to direct for publishers that include Random House, Hachette and Penguin.

Whether pulling all-nighters on the Earthquake subway station at Universal Studios Orlando, a motion-base attraction in Japan or a theater at the Kennedy Space Center, his creativity and calm when faced with complex assignments and tight deadlines have been a constant in his production career.

While most of Bob Walter's reading assignments have involved directing himself in his own facility, he is available to read in other studios where his directing experience gives him the patience and insight to understand what another director needs.